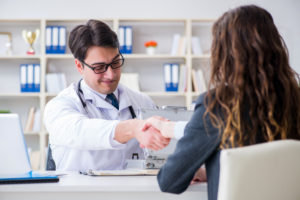 Unlike what we may see on television and in movies, medical malpractice litigation is not as successful as it appears to be. According to the US Department of Health and Human Services, the cost of medical malpractice is estimated between $76 and $126 billion per year. Since 1976, malpractice premiums have risen by some 920%. Even with these massive amounts, barely 28 cents of every dollar reaches the plaintiff. Contrary to popular opinion, juries find  overwhelmingly for the physician, nearly 90% of the time.

Mediation provides an alternative to this costly, adversarial, prolonged, and emotionless process. In mediation, the reverse occurs: no one testifies, but everyone talks. The process is facilitated by a mediator who seeks to create an atmosphere in which physician and patient have an opportunity to talk to one another and listen. Most mediators who have dealt with medical malpractice claims can tell moving stories in which this collequy between a physician and patient have been an essential factor in resolving a claim without the need for a trial.

Mediation provides high satisfaction rates on both sides, as high as 90%. In addition, the informal mediation process lets all parties speak for themselves, which proves cathartic for everyone.  Mediation is also highly time-efficient, usually taking about one full day, whereas a typical medical malpractice trial takes at least a week, and sometimes as long as a month.

Mediation is essentially a negotiation facilitated by a disinterested third party. The Mediator does not make decisions but instead creates a space in which the parties can make them. For example, in medical malpractice mediation, the physician, facility, or insurer may be the final decision-maker. On the other side, the patients, or their families, will be the final decision-makers, although they will rely on their counsel for recommendations most of the time. The mediator does not impose a resolution. Instead, the agreement must come from both sides. Otherwise, there can be no resolution.

Mediation can only be successful if both sides are willing to make a reasonable good-faith efforts to settle. On the other hand, if one or more parties come to mediation with an adversarial attitude and attempts to prove the other side has no merit to its claim, the mediation is almost certainly doomed before it has started.

The mediator usually begins by explaining the process and ground rules of the mediation. Once all parties understand and agree, the mediator will have each party tell their story regarding the claim. Unlike court, lawyers are not required to do all of the talking. Instead, anyone from either side may speak, ask questions, or otherwise take part in the back and forth. The usual process is for the attorneys on either side to outline their case and their strongest arguments, after which, if they choose, the doctor and patient will give their perspectives.

Most medications then have the parties separate into “caucuses” and move to separate rooms. The mediator moves between them, discussing their position, keeping information private from the other side when requested. When the talk eventually turns to settlement options, they are conveyed to both sides by the mediator.

Mediations are successful more than 50% of the time. But even if they are not, mediation often paves the road to settlement in the future.  In short, there is everything to gain by attempting meditation and nothing to lose but the cost of the mediation itself.

There is probably no more emotionally ladened area of dispute resolution than nursing home malpractice cases. An adult child must speak for a parent resident in a nursing facility in many such situations, a complex and emotional situation for the entire family. This can lead to feelings of guilt, anxiety, and even disagreement with the rest of the family regarding the original decision to use the nursing facility.  A patient suffering injury, illness, or death while at a facility can lead to powerful feelings of anger and a desire for retribution. With this undercurrent of anger and frustration, it can be difficult for the family to consider arguments or positions made by the facility, or even their attorneys, that the injury, illness, or death may have happened as a result of the patient’s faltering medical condition, and not necessarily be due to the facility in which it occurred.

Mediation in a nursing home setting can be particularly effective because it allows for the plaintiff and/or their family to feel as though they have a voice.  In contrast, litigation’s adversarial approach stops all communication, leaving only lawyers speaking in emotionless language about an emotionally charged event. Mediators can work with the plaintiff and help them communicate their concerns, opening the way to a dialogue and the potential to reach a mutually satisfactory resolution. The process has been extremely successful, with a very high percentage of nursing home mediation cases resulting in a settlement.

The Best of Both Worlds

Mediation in medical malpractice disputes is highly effective. Rather than the weeks of time that may be required for a trial, the negotiations are usually reduced to a day or so, leading to higher satisfaction levels. It is a cathartic process for both sides, where the injured can describe how they were hurt, and the doctor or facility can commiserate and even apologize without opening themselves up to potential financial damages. Rather than making enemies out of both sides, mediation allows these sides to come together, air out their grievances, and then work towards an equitable, fair, and satisfying solution. And for the minority of mediated disputes that do not reach a satisfactory settlement, either side is still free to move forward with litigation if they feel they cannot accept the other side’s offer.