Court dockets are presently jammed owing to the Pandemic delaying 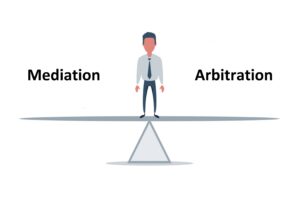 and preventing trials and the pent-up demand now that in-person trials have resumed. Further stressing the system, the Florida State Supreme Court is demanding that cases be disposed of within 12, 18, or 24 months depending on their complexity and the track to which they are assigned.

As a result, the courts are enlisting various forms of Alternative Dispute Resolution to move cases through the system more quickly by eliminating the need for a trial.

Unlike mediation, where a neutral third-party attempts to facilitate a settlement, in non-binding arbitration, the arbitrator decides the issues of liability and damages.

Non-binding arbitration is governed by F.S 44.103. A single arbitrator conducts an informal hearing. The rules of evidence are relaxed. Witnesses are not usually called. The opposing attorneys proffer the facts and evidence they expect to elicit at trial. The arbitrator’s decision as to liability and damages is reduced to writing and provided to the parties within 10 days. It is final unless a party files a motion for a trial de novo within 20 days.

If the result of the subsequent trial is worse for the party requesting the trial de novo than the arbitrator’s decision, they are responsible for their opponent’s costs and legal fees.

A recent innovation is the (Med/Arb). This occurs when the parties agree to both mediate their dispute and if the mediation does not result in a settlement to arbitrate. They also agree that the same person will act as both mediator and arbitrator.

While mediating the parties know that they are in total control of the outcome. The decision to settle or not and at what cost is theirs alone, but they also know that if they don’t settle, the arbitration will follow and a third party will decide as to liability and damages, which though non-binding may result in the imposition of attorney’s fees and costs following trial.

This adds an incentive to settle their dispute at mediation and increases the chances of a successful resolution.