In recent years, mediation has become one of the most frequently utilized process of conflict 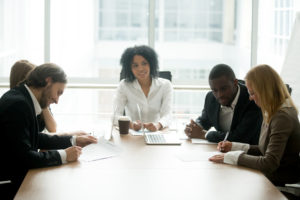 resolution. However, while its use has not always been so prevalent, it has deep historical roots. Historians believe the origins of mediation date to ancient Mesopotamia (4,500-1900 B.C.E.) in what is now the middle east. Biblical references to mediation exist as well, and include the well-known tale of King Solomon’s mediation of a custody dispute between two women.

In our United States, it is generally accepted that the modern use of mediation developed in response to labor unrest in the early 20th century and social unrest during the mid-20th century, particularly the civil-rights era. Courts began encouraging alternative dispute resolution in the 1970s as Court dockets became increasingly more congested. Since then, pre-trial mediation has become required in many jurisdictions, and it has become a successful alternative to the uncertainty of a trial. The informal, non-binding process of modern mediation has evolved to encourage cooperative problem-solving and a non-adversarial approach, and fosters the self-determination craved by litigants.

Mediation originally developed as a way to settle disputes. This fundamental core purpose has not changed. What has changed, however, is the backdrop against which disputes arise—our modern society in the United States is often characterized as “litigious”. Some will take umbrage at this, and point out the “fundamental constitutional right of access to the courts.” Certainly, this is a right we Americans do take for granted. However, the reality we face in 21st century America is made up of ever-more crowded Court dockets, delays due to pandemics and Jury venires made up of fewer and fewer people who are able (or willing) to be impartial. In response to these societal and legal factors, we should anticipate that alternative dispute resolution, particularly mediation, will play an increasing role in litigation as new methods and models evolve and are implemented.